Posted on February 12, 2013 by kneesworthcommunitygroup

Further to the posts earlier in the year about the use of 61 Old North Road being used for patients. In late January Kneesworth House Hospital submitted a planning proposal to return the property to residential use for their staff. You can see the details by entering the reference S/2594/12/FL here.

There is less than a week (up to the 18th Feb) till the deadline for submissions by residents, so if you wish to comment, then you don’t have long.

The returning of 61 ONR to residential use is a welcome move and the Kneesworth Community Group are submitting a response, making the following points:

If you agree with the points above, please respond individually to the Planning application (via the link above) – the more responses we have, the greater  weighting the community’s views will have.

Posted on December 10, 2012 by kneesworthcommunitygroup

A press release from South Cambridgeshire District Council has been issued late this afternoon stating that they are nolonger interested in Mettle Hill. Thank you to everyone for their contributions and help on a fantastic and successful campaign. Further updates to follow and here is the press release:

Council leaders have confirmed today (Friday 7 December) they are no longer bidding to purchase a former Travellers’ site in Meldreth after a rival offer was confirmed for the land.

Cabinet members recommended last month that a meeting of Full Council should consider purchasing the site to meet legal obligations to provide sufficient future accommodation for growing Traveller families currently living in the district. But news of an offer from Meldreth Parish Council has ended their interest.

“We still believe the site was a viable option to meet our future legal obligations for Travellers, but the Parish Council has put in a rival bid at the market value and it would be completely wrong and a terrible use of public money if we were to pay over the odds and enter into a bidding war. If the Parish Council decides to pull out we will re-enter into negotiations.”

Independent research published in June established that 20 extra pitches would be needed in South Cambridgeshire until 2031 to provide sufficient housing for Travellers – but a recent letter from Andrew Lansley MP to the Leader of the Council suggests Government policy does not require councils to provide further pitches.

Confirmation of the rival bid also means the District Council’s meeting to debate the purchase – that had been postponed until 10 January to give extra time to listen to residents’ concerns before making a decision – has now been cancelled.

Plans to fund the purchase of two existing Travellers’ sites in the district at Whaddon, and off the A14 near Milton, will now be discussed at the Council meeting on Thursday 31 January. Both sites are currently owned by Cambridgeshire County Council but managed on their behalf by South Cambridgeshire District Council.

If the purchases are agreed, South Cambridgeshire District Council will bid for further government funding from the Homes and Communities Agency to improve the site at Whaddon. This funding would also be used to add two further pitches through better use of the land.

“I would like to particularly thank Cllr Rob Searles at Meldreth Parish Council as he has worked very constructively with us about plans for the site. During our discussions with Andrew Lansley about this issue he offered to facilitate a meeting with central government to discuss Gypsy and Traveller matters for the area and we look forward to him making the arrangements.”

Postponement on vote for Mettle Hill

Posted on November 17, 2012 by kneesworthcommunitygroup

By delaying the vote on Whaddon and Mettle Hill until the 10th January, there is an opportunity for the Parish Council to come up with alternative plans for the site (at least in the case of Mettle Hill). But it does leave our area of Cambridgeshire for the third year running, not knowing if there will be an unnecessary and inappropriate development our doorstep.

Since Mettle Hill closed for the second time 15 years ago, this area has seen peaceful integration and co-existence between the settled and traveller communities. The ratios and densities are higher than the national average – but it works.

We need from South Cambridgeshire District Council a clear statement (preferably at their full council meeting on the 22nd November) that the local parishes accommodate more of their fair-share of pitches and that their ongoing search for sites should be limited to areas that currently host a below average number of pitches.

And why not start with Cllr Howell’s constituency?

Posted on November 14, 2012 by kneesworthcommunitygroup

The Chairman of the [South Cambs District] Council has agreed to defer consideration of Gypsy and Traveller site proposals to an extraordinary meeting of the Council on 10th January 2013 at 6.30 p.m. This means that any issue relating to gypsy and traveller sites, including the allocation of funding in the Council’s capital programme for the potential purchandse of sites or redevelopment of sites, will not be considered at the meeting on 22nd November 2012.

Whether this means that they have agreed that railroading the Mettle Hill and Whaddon purchases through with no notice or consultation is bad for local democracy or the ruling group thought they’d lose is debatable.

At least now the local residents have the time to present their arguements and alternative proposals in a considered manner.

Posted on November 8, 2012 by kneesworthcommunitygroup

South Cambridgeshire District Council is principally pursuing Mettle Hill as a site for G&T’s as it has planning permission. But when challenged in a question to Cabinet on whether this was still in effect, Mark Howell responded “to our knowledge” (i.e. they hadn’t bothered to check).

A quick Google turned up the following (my emphasis):

Lord Denning provided this definition of abandonment in Hartley v Minister of Housing and Local Government [1970] 2 WLR
1:
“I think that when a man ceases to use a site for a particular purpose and lets
it remain unused for a considerable time, then the proper inference may be
that he has abandoned the former use. Once abandoned, he cannot start to
use the site again, unless he gets planning permission: and this is so even
though the new use is the same as the previous one.”

Posted on November 8, 2012 by kneesworthcommunitygroup

Cllr Mark Howell, (Dear) leader of South Cambridgeshire District Council’s cabinet member for housing, is on point, promoting the new Gypsy site at Mettle Hill. He is ably supported by other Councillors who have sizable Traveler communities around Willingham. They decided to pass responsibility for saying ‘NO’ to their own initiative by passing the buck to the whole Council.

Several Councillors objected to the lateness of notification of this initiative to the Communities most affected, using such words as underhand and pointing out that the idea went against previous promises given to Meldreth and standard decision making policies of  the SCDC. Local interests have prevailed, and now the whole District Council will have to make the decision on the 22nd November  (be there to make your views known).

Should the whole Council reject the Mettle Hill idea, this will not be the end of the matter. SCDC being willing to go against promises previously given and their own policies, would no doubt feel little compunction in revisiting previously rejected sites e.g Bassingbourn. SCDC seem to have an undeclared strategy for Travelers in that only two specific areas Willingham and Meldreth seem to be the default locations where they would most want to place new sites.

To be fair, Willingham does have a problem, they have a lot of Pitches, when applications for new pitches are rejected by SCDC they are overruled on appeal by the local inspector with the reason that there is nowhere else to put the new sites (not in 350 square miles?  I don’t believe it!)  .

This leads to the conclusion that there is a systemic failure in the whole process of allocating sites for Travelers.  The responsibility spans the political establishment from Eric Pickles MP (Secretary of State for Communities and Local Government) representing the government, the County Council, South Cambs District Council who all have responsibilities in this area.

More importantly Cambridgeshire administrations have achieved an amazing record, that South Cambs district has the highest concentration of travelling folk pitches of any District the country. The fact that these concentrations are placed into the 2 small areas surrounding Meldreth and Willingham communities smacks as a failure in local Democracy.

It is possible to feel a deal of sympathy for the Councillors who represent Willingham.  I feel however that they have taken advantage of being in control of this particular committee to create a crisis situation. The effect is that Meldreth and surrounding communities are being forced to defend their community against predictable strife, unforeseen and now ignored by this Committee.

Cllr Mark Howell is really keen to have this site at Nettle Hill, and promised when it goes ahead to take up residence and deal with any outbreak of civil strife in person (a brave stand given a previous strong minded Politician was incarcerated by the previous occupants of Mettle Hill). His presence may be fully necessary given the lack of an adequate police force in the area. Even when there was an adequate Police presence they were reluctant to actually enter the site in defense of local ratepayers.

Given the preponderance of Conservative Councillors involved in the whole process at local and national government with their big community philosophy (in this case all focused onto  small areas in SCDC) one can be forgiven in believing that they take a very parochial view of their responsibilities, and that they are compounding poor decisions with desperate inadequately researched decisions driven by a forceful Cllr Howell.

Posted on November 7, 2012 by kneesworthcommunitygroup

We attended the Parish Council Extraordinary Meeting this evening, along with the BBC and pretty much every person in Whaddon and Meldreth plus a number from Kneesworth, Bassingbourn, Orwell, Shepreth and Melbourn. A few things struck home:

So you’ll have a settled and integrated minority displaced and their human rights ignored, to be replaced by a Gypsy / Traveller site which has the potential for being illegally expanded.

Posted on November 6, 2012 by kneesworthcommunitygroup

The Councillors on the District Council representing wards adjacent to Meldreth and members of the controlling Conservative group are:

Theirs and all the councillors email addresses can be found here.

They will have a vote on whether SCDC moves ahead with the Mettle Hill and Whaddon G&T site proposal on the 22nd November when it comes before the full council. If you agree that the previous decision by the Council that these site are unsiutable is correct – then please let your concillors know.

We need 5 members of the Conservative group to agree with the Rt Hon Andrew Lansley MP (Conservative & member of the Cabinet) that the Council is wrong and vote for common-sense.

Posted on November 5, 2012 by kneesworthcommunitygroup 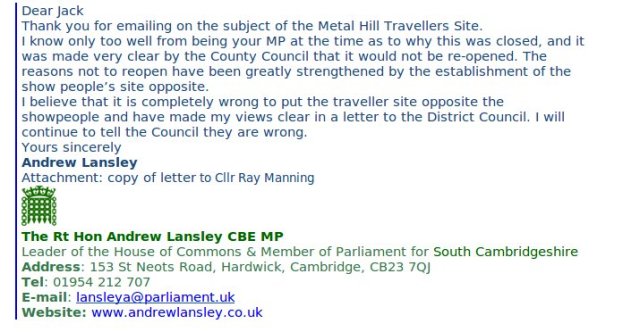 Posted on November 5, 2012 by kneesworthcommunitygroup

There is an online petition objecting to the re-opening of Mettle Hill at the link below. At present this is up to 344 signatures. Please consider signing this, and also adding your address if you’re from Kneesworth or Bassingbourn – so the Meldreth group can counter the nonsense put about by SCDC that Bassingbourn residents want Mettle Hill to re-open.

South Cambs District Council has made a surprise announcement of their intention to purchase and then re-open the Mettle Hill Traveller Site, Meldreth, with no consultation whatsoever of anyone in living in Meldreth and in spite of the fact that this would go against their very own policies.

The council has shown a total disregard for the established homes on one English Traveller site and two Travelling Showmen’s sites, which have grown up successfully in direct proximity to the disused site, and which are integrated into Meldreth village.